Over the last decade, households in the New Orleans metro continued to shrink in size, but at a slower rate than in previous decades. Within New Orleans, smaller households are more prevalent in historic neighborhoods near the river, while larger households settle in neighborhoods at the city’s edge. The number of people living in metro area group quarters has declined 28 percent since 2000, with decreases in correctional facilities and nursing homes and increases in college dorms—although trends vary widely by parish.

As the Census Bureau releases in waves the details from its once–every–ten–year survey, this steady stream of data is gradually unveiling a new and deeper understanding of the changing demographics of our city, metro area, and country [1]. This brief analyzes trends in two data points recently released by the Census Bureau—average household size and group quarters population. 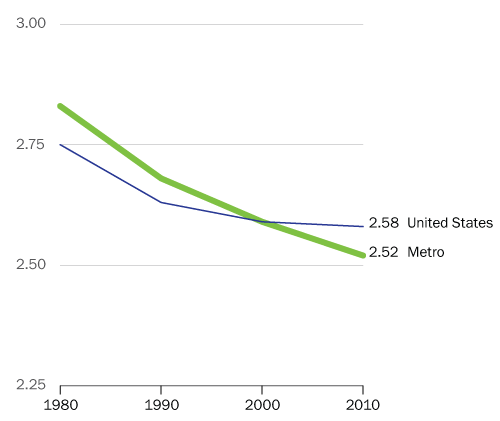 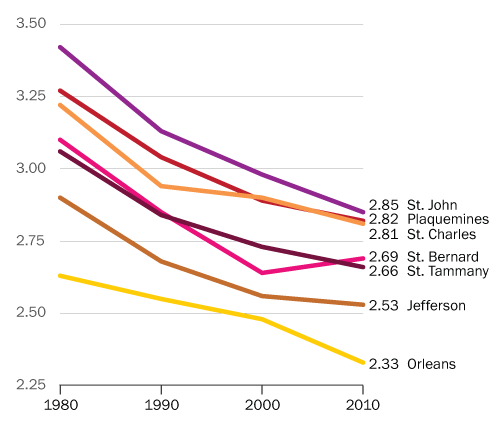 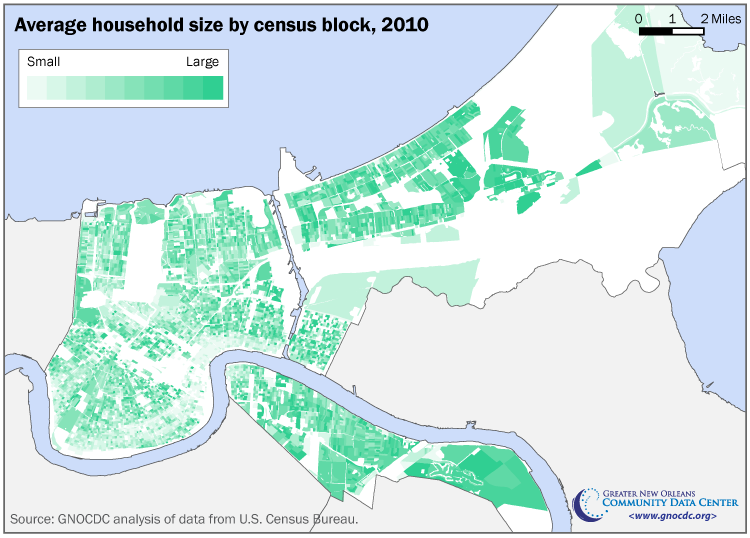 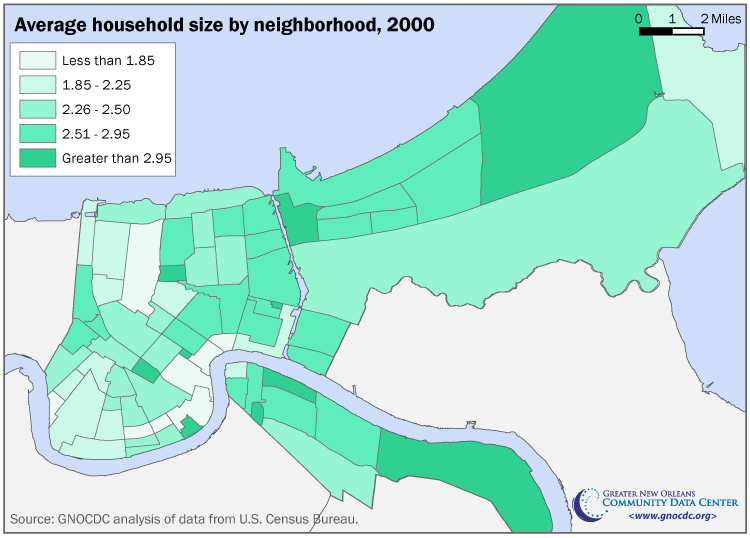 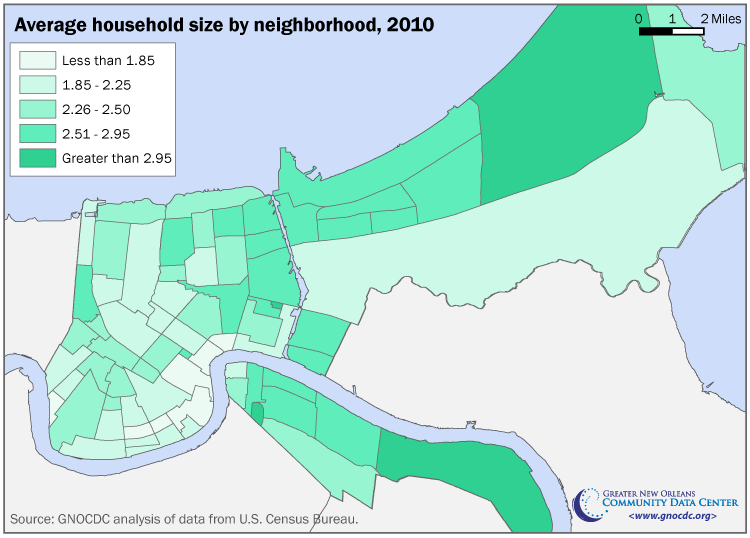 The number of people living in metro area group quarters has shrunk 28 percent since 2000, with decreases in correctional facilities and nursing homes and increases in college dorms—although trends vary widely by parish.

The Census Bureau has released block level data about population in seven categories of group quarters. They are:

5. College/university student housing includes residence halls and dormitories and fraternity and sorority housing recognized by the college or university.

Jefferson, Orleans, and St. Tammany all experienced a decrease in juveniles living in institutions such as group homes, residential treatment centers, and correctional facilities. In Jefferson Parish, the number of juveniles living in institutions fell from 229 to 143, in Orleans from 86 to 52, and in St. Tammany from 886 to 718. Plaquemines and St. Bernard, on the other hand, went from having no residents in juvenile facilities to having 27 and 37 respectively. St. Charles and St. John continue to have no individuals in juvenile facilities.

In New Orleans, 13,165 group quarters residents live in nursing homes, college dorms and other noninstitutional housing scattered around the city, and correctional facilities and military barracks clustered in a few locations.

Military quarters are clustered on the west bank and in New Orleans east. Seventy individuals live in military quarters in the U.S. Naval Support area and 16 live in Viavant/Venetian Isles.

Fully 47 of New Orleans' 72 neighborhoods house the 2,204 residents in other noninstitutional group quarters such as group homes for adults, homeless shelters, and religious group quarters. 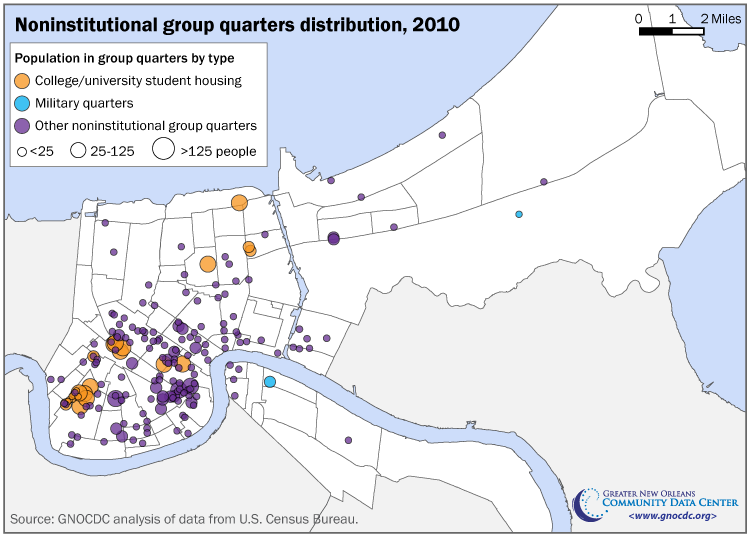 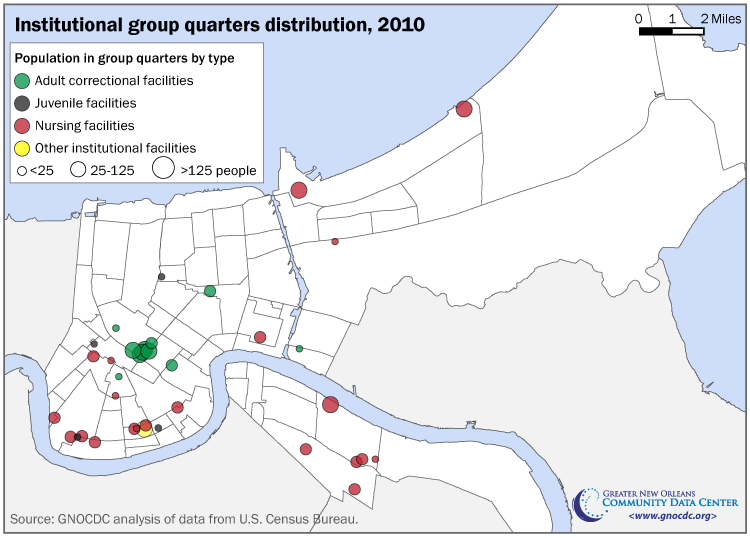 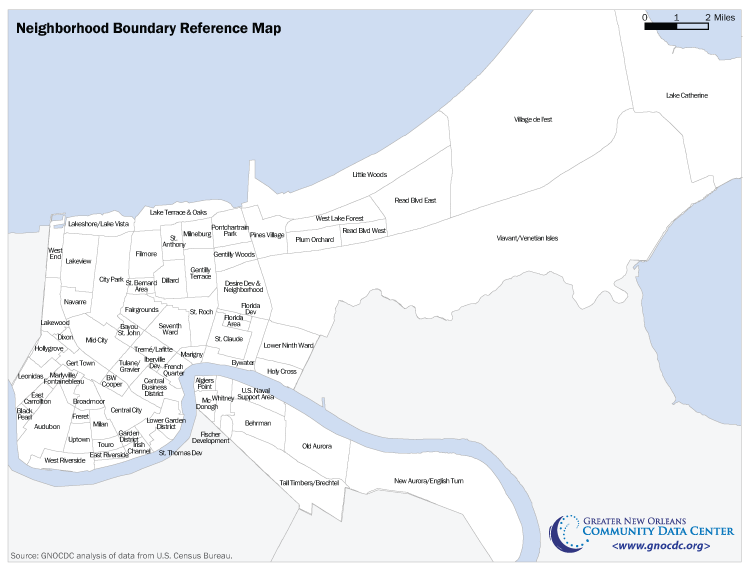 Studies of the accuracy of the Census 2010 count will not be undertaken until more Census 2010 data has been released. However, studies of earlier decennial censuses provide guidance as to likely limitations of the Census 2010. A state–specific study of the Census 2000 undercount conducted by PricewaterhouseCoopers concluded that Louisiana's population in 2000 was undercounted by 60,698 or 1.34 percent [7]. Studies of both the 1990 and 2000 decennial censuses concluded that American Indians, Asians, African Americans, Hispanics, and children were most likely to be undercounted [8]. And a study of the 2000 decennial census concluded that some people were double counted, including college students living away from home, and families counted at both their main and vacation homes. These people were more likely to be white and higher–income [9].

[3] Plyer, A., & Ortiz, E. (2011). Shifts in Population and Loss of Children across the New Orleans Metro Area. The Data Center. Retrieved from https://www.datacenterresearch.org/reports_analysis/population-loss-and-vacant-housing/.

[4] Plyer, A., & Ortiz, E. (2011). Shifts in Population and Loss of Children across the New Orleans Metro Area. The Data Center. Retrieved from https://www.datacenterresearch.org/reports_analysis/shifts-in-population-and-loss-of-children-across-the-new-orleans-metro-area/.

[5] Plyer, A., & Ortiz, E. (2011). Shifts in Population and Loss of Children across the New Orleans Metro Area. The Data Center. Retrieved from https://www.datacenterresearch.org/reports_analysis/shifts-in-population-and-loss-of-children-across-the-new-orleans-metro-area/.

[6] According to the Census 2010, the Florida Development also has an average household size larger than 2.95. But a total of only six residents in two households were counted in this neighborhood by the U.S. Census Bureau. Therefore, it was deleted it from this analysis due to an unusually small total population.