The population of New Orleans grew from 343,829 in 2010 to 383,997 in 2020—an increase of 11.7% which was well above the national population growth rate of 7.4%. Much of the population growth in New Orleans was likely due to the continuing post-Katrina recovery in the early part of the decade. In fact, year-by-year estimates from the Census Bureau suggest the city’s population may have reached a peak mid-decade and begun to decline slightly in the last few years.

In contrast to estimates, which are only available for the city as a whole, the once-every-ten-year Census headcount gives a glimpse of population changes at the neighborhood level. This brief covers neighborhood population recovery rates since 2000—before Hurricane Katrina struck and the federal levees failed, flooding some 80% of the city. It also quantifies neighborhood level changes from 2010 to 2020 to highlight where more recent growth or population loss has occurred, and the racial dynamics of those recent changes. The 2020 data released last month also provides total counts of children by neighborhood which can be helpful for locating the services children will need as New Orleanians struggle to recover from their most recent disasters—the COVID-19 pandemic and Hurricane Ida.

According to the 2020 Census, New Orleans has only 79% of its pre-Katrina total population, with some neighborhoods shrinking and some growing.

Only five neighborhoods have less than half the population they had prior to Hurricane Katrina, including four that encompass former public housing sites being redeveloped as mixed-income housing: Florida Development, B.W. Cooper Apts., Iberville, and St. Bernard Area. The Lower Ninth Ward, where the surge of water was so strong it knocked homes completely off their foundations, also has less than half the population it had prior to Hurricane Katrina. 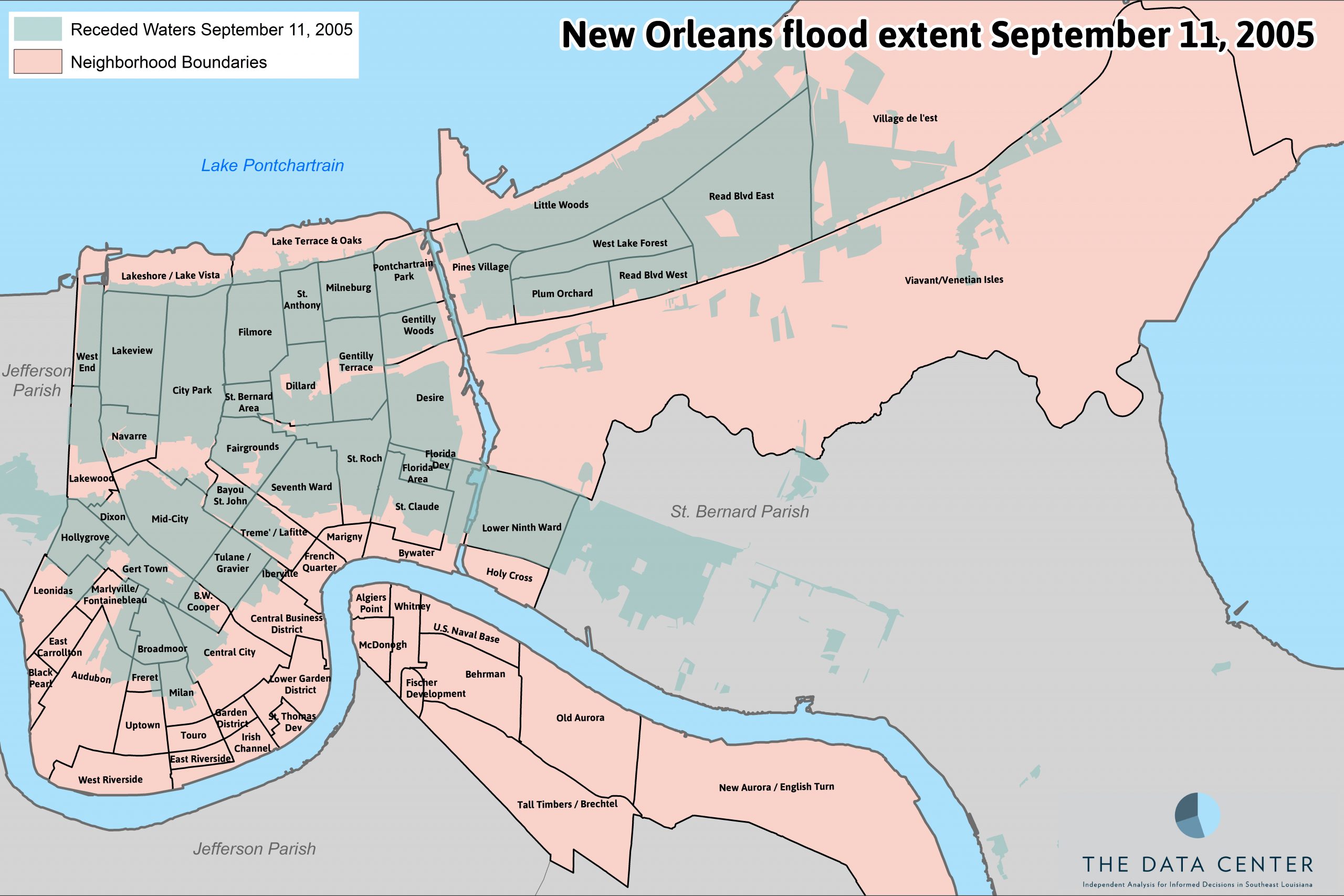 Other neighborhoods that flooded are among those with lower population recovery compared to 2000 before Hurricane Katrina hit. West Lake Forest, Florida Area, Viavant/Venetian Isles, St. Roch, Holy Cross, St. Claude, Seventh Ward, Tremé/LaFitte, Desire, Freret, and Village de l’Est all have between 50 and 70 percent of the residents they had in 2000. In the case of Village de l’Est a portion of this difference is due to a census tract boundary change (described below) which caused the northern portion of Village de l’Est residents to be counted in the new Lake Catherine/Village de l’Est neighborhood. Among sites of former public housing projects that are being redeveloped as mixed-income housing, only the St. Thomas Development has resident totals as high as 77.6% of its 2000 total. 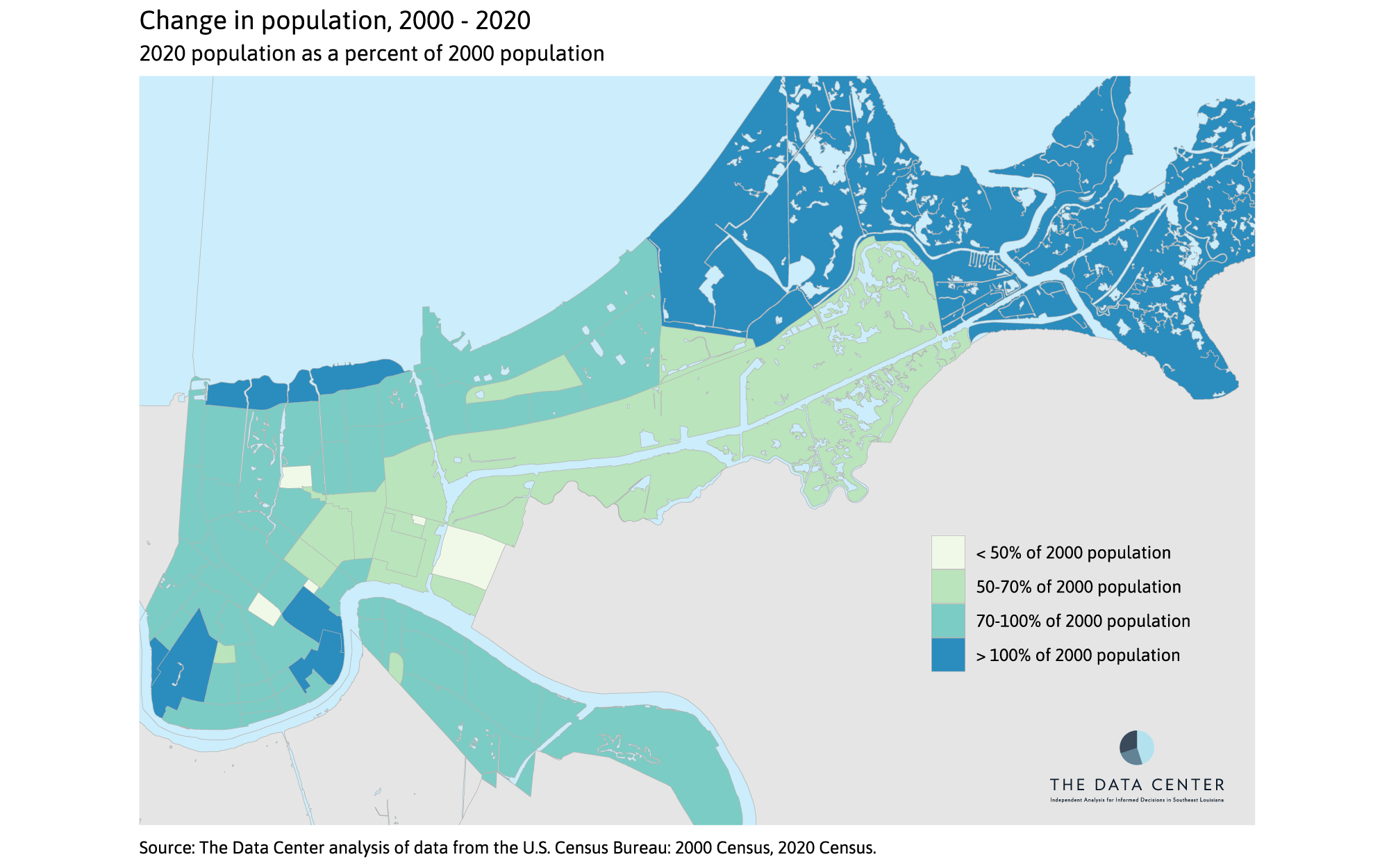 Sixteen years after Hurricane Katrina, seven of New Orleans’ 72 neighborhoods actually have larger populations than they did in 2000. These include the Lower Garden District and the Central Business District which together encompass the “Warehouse District” where many commercial buildings have been redeveloped to apartments and condo buildings. Audubon and Lake Terrace & Lake Oaks both experienced significant population growth driven almost entirely by increases in students living in group quarters at Tulane University, Loyola University, and University of New Orleans, which we document in our upcoming brief on group quarters populations. Black Pearl and Lakeshore/Lake Vista experienced modest population growth. The Census Bureau changed the boundary of the census tract which previously represented Lake Catherine, such that it now encompasses a part of the Village de l’Est neighborhood. Because of (and only because of) this boundary change, this neighborhood counts as one of the seven that has experienced population growth since 2000.

From 2010 to 2020, New Orleans’ population grew 12%, with growth skewed toward neighborhoods that flooded during Katrina, as residents continued to rebuild.

Given their significant population loss after the 2005 levee failures, by 2010 (five years after Hurricane Katrina) several neighborhoods that flooded had very little population. Thus, from 2010 to 2020, 9 of the 10 neighborhoods that had the largest population growth were among those that flooded. Little Woods, Lakeview, Central City, Lower Ninth Ward, St. Bernard Area, Filmore, Tremé/Lafitte, West End, and Plum Orchard each had population growth between 1,400 and 4,800 residents as these neighborhoods continued to rebuild. Notably, despite the fact that St. Bernard Area, Tremé/Lafitte, and Lower Ninth Ward gained the most residents between 2010 and 2020, they still have less than 70% of the residents they had in 2000 before Hurricane Katrina. The Central Business District also ranked in the top 10, gaining over 2,000 residents between 2010 and 2020. Fully 51 neighborhoods gained population between 2010 and 2020. Nearly all of them flooded following the levee failures. 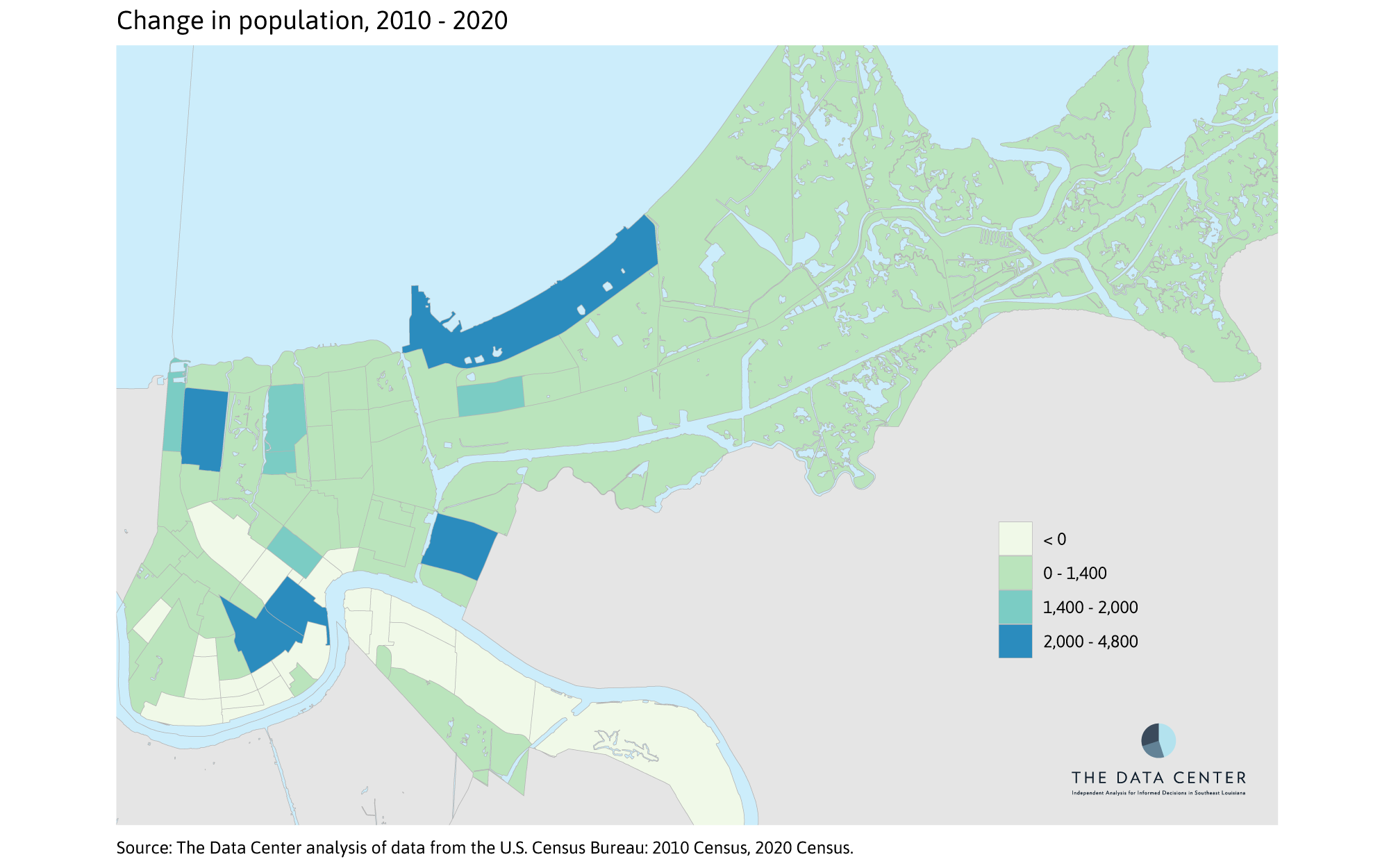 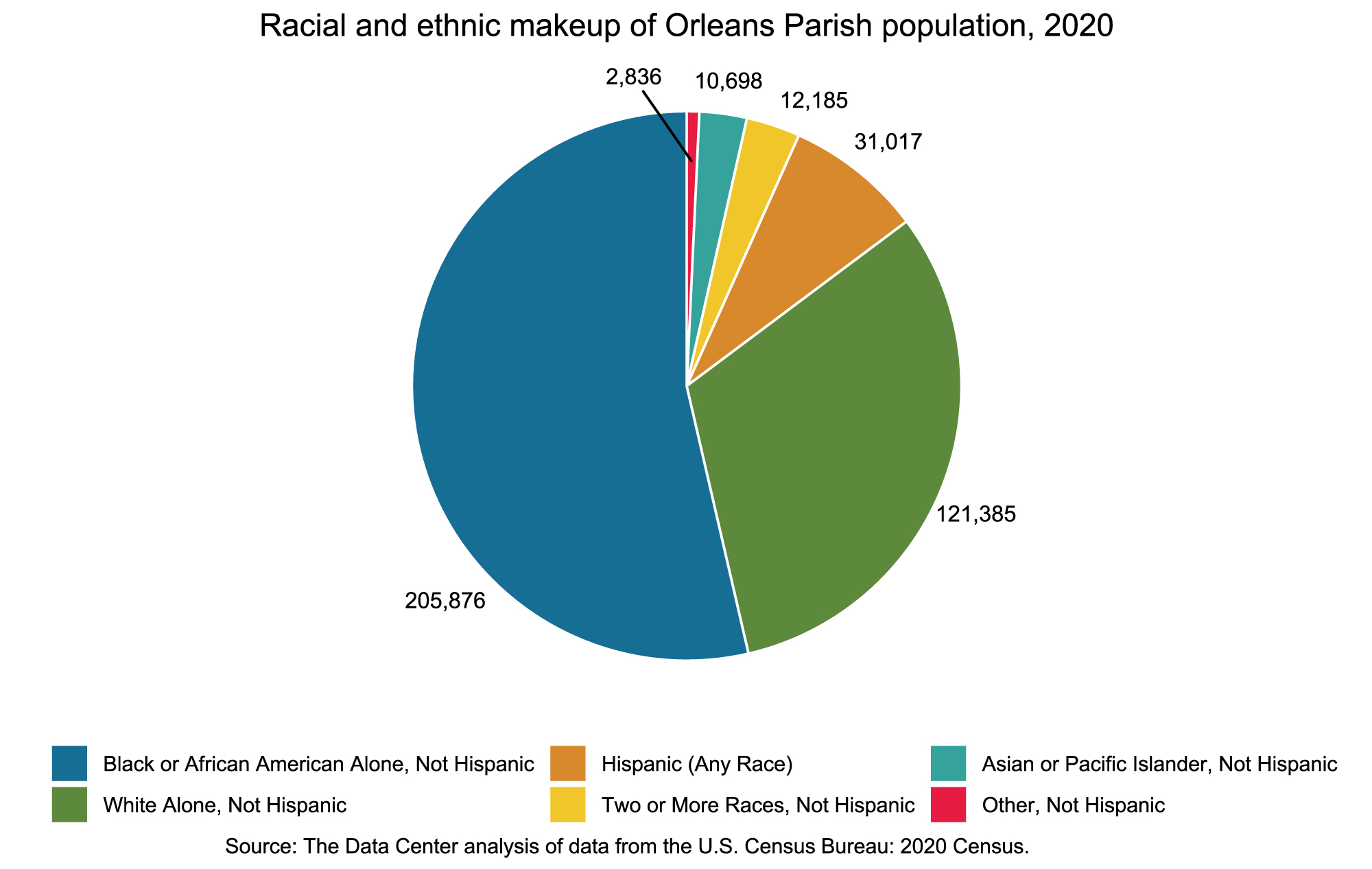 Importantly, Multiracial individuals may be any combination of White, Asian, Black, Native American, Pacific Islander or other races. And the Hispanic residents of New Orleans include White Hispanic, Black Hispanic, Native American-Hispanic, and Multiracial Hispanic individuals (as explored further in our forthcoming brief on population shifts across metro New Orleans) and should not be treated as a monolith. But for the purposes of this neighborhood analysis, we combine New Orleanians into five broad, albeit limited, categories.

The fast-growing Hispanic population in New Orleans now represents 8% of total population. In 2020, Hispanic New Orleanians are particularly concentrated in neighborhoods where they have historically had large populations such as Mid-City, Tulane/Gravier, and Viavant/Venetian Isles. In each of these three neighborhoods, Hispanic individuals represented more than 10% of residents in 2010 and by 2020 represented over 18% of residents. But Hispanic New Orleanians are growing in number and now represent more than 10% of residents in Audubon, Behrman, Broadmoor, Hollygrove, Plum Orchard, Village de l’Est, and West End. 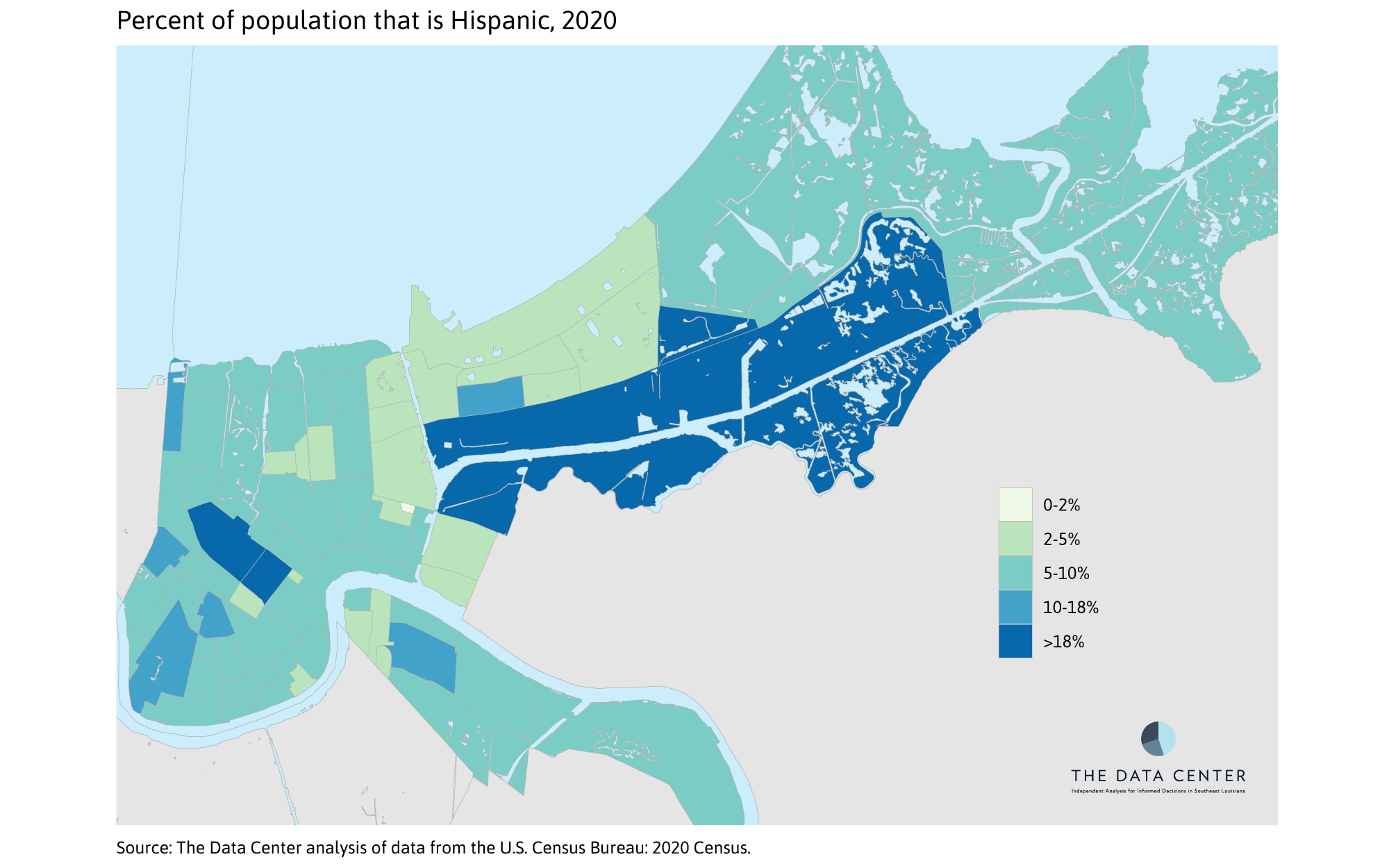 In several other neighborhoods, the share of the Black population has shrunk but remains above 60%. These include:

In Fairgrounds, Freret, and Leonidas, the share of the Black population fell to below 60%, and in Broadmoor, Mid-City, and Milan it fell to below 50%, as the White and Hispanic populations grew substantially in all these neighborhoods. 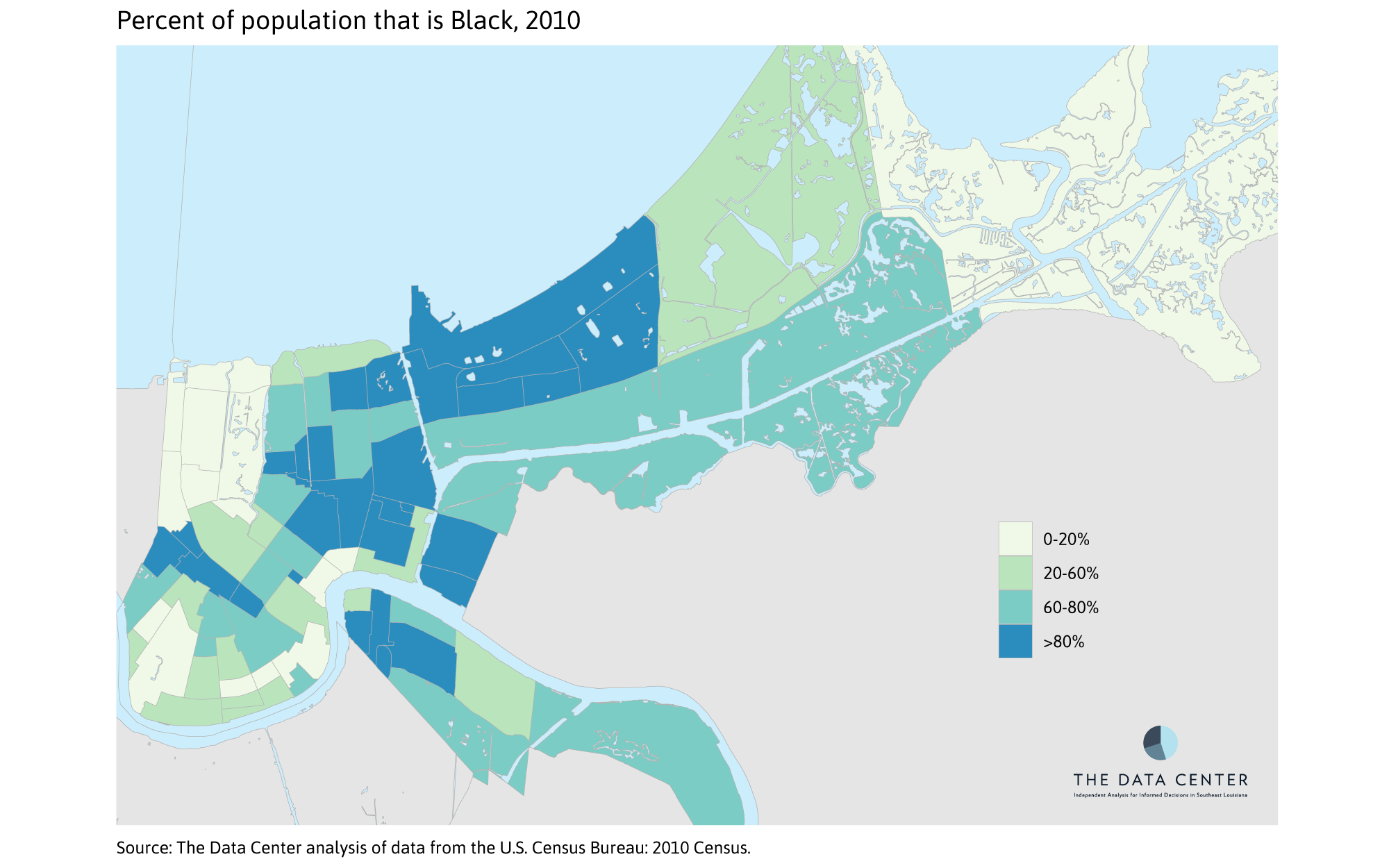 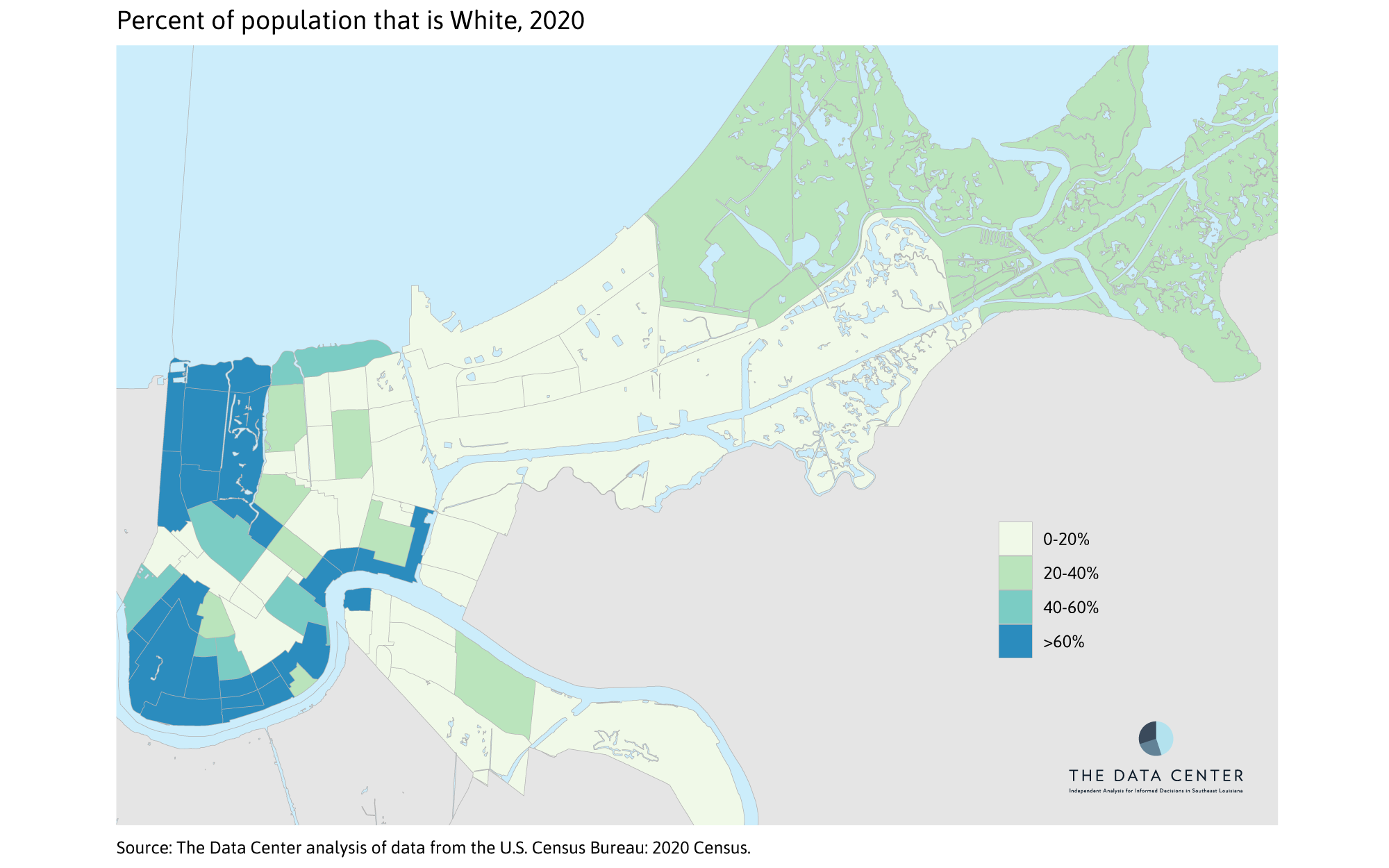 The 2020 Census form made it easier to document our diverse heritage. Nationwide, people reporting more than one race jumped from 3% in 2010 to 10%—that’s an increase of 24.8 million. But birth records document only 2.3 million Multiracial children born this decade. Thus, the increase in Multiracial individuals in 2020 was largely driven by people who formerly selected only one race on census forms. 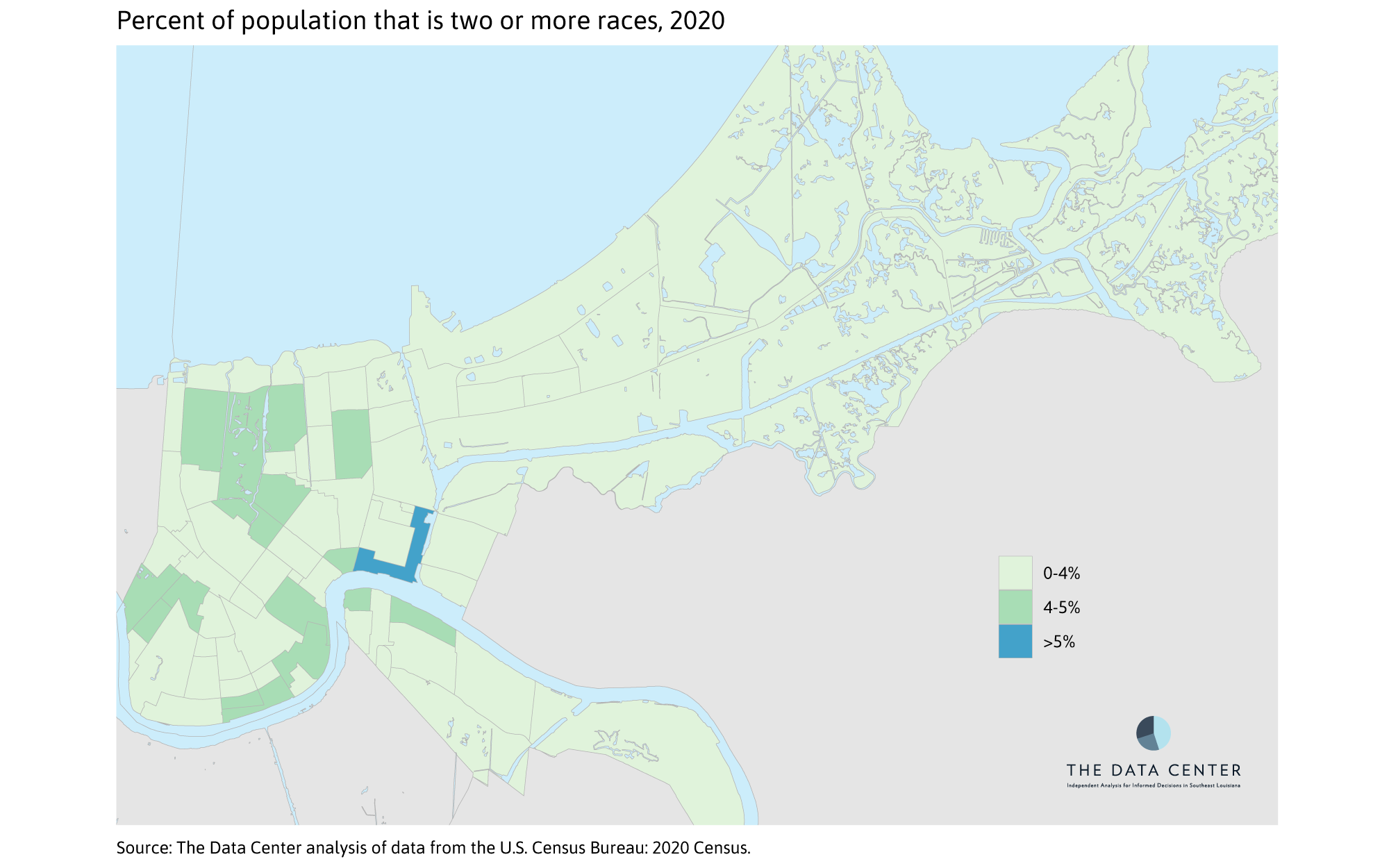 Although the Asian/Pacific Islander population of New Orleans did not grow substantially between 2010 and 2020, and remains about 3% of the city’s population, some neighborhoods have particularly large concentrations. Village de l’Est famously has a large share of Asian residents, but the share that is Asian fell from 44.7% in 2010 to 32.5% in 2020. (As noted above Hispanic residents grew in this neighborhood to 18.6% in 2020). Read Blvd East has a large and growing Asian population that was 12.7% of residents in 2010 and is now 14.5%. In New Aurora/English Turn, the Asian population is large but shrinking—representing 10.6% of the population in 2010 down to 8.6% in 2020. The Asian population of the Central Business District grew from 7.4% in 2010 to 8.7% in 2020. The Asian population of Lake Catherine was large in 2010 at 4.9% and grew to 6.7% by 2020, but this was likely a byproduct of an expanded census tract which means that Lake Catherine now encompasses part of Village de l’Est. 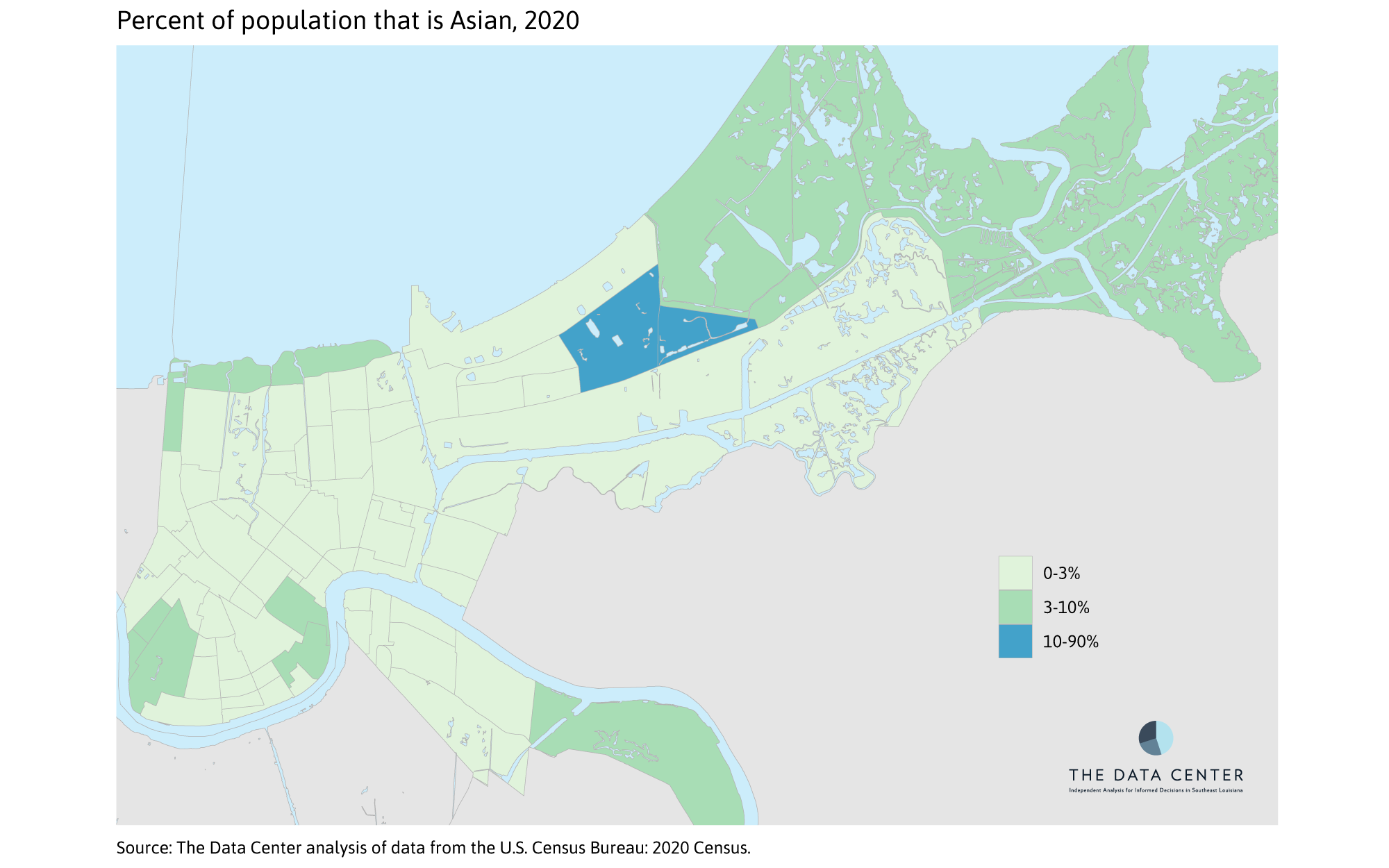 While the total number of children in New Orleans grew by less than 5,000, growth across neighborhoods was uneven with about half gaining children and the other half experiencing a decrease in children.

The number of children (under 18 years old) in New Orleans grew from 73,000 in 2010 to nearly 78,000 in 2020 but did not reach the city’s pre-Katrina number of children which was nearly 130,000. While the city’s increase in children (6%) may not seem large, it stood in contrast to the nation which experienced a 1.4% decline in children over the decade. Notably, adults in New Orleans grew 13% from 2010 to 2020, slightly ahead of the national 10% increase. The fact that both growth in adults and children outpaced the nation is likely due to continued post-Katrina recovery in the early part of the decade as mentioned above.

Lakeview gained more than 1,000 children. Other neighborhoods that flooded during Katrina including Village de l’Est, Lower Ninth Ward, Central City, Little Woods, Plum Orchard, St. Bernard Area, West End, Desire, Filmore, and West Lake Forest all gained between 300 and 1000 children. The child population gain in Village de l’Est is particularly notable because of the boundary change made by the Census Bureau which removed a portion of that neighborhood and merged it with the Lake Catherine neighborhood.

But many neighborhoods that flooded during Katrina did not see their child populations rebound between 2010 and 2020. For example, Freret, Read Blvd East, Bayou St. John, St. Claude, Fairgrounds, Leonidas, Gentilly Terrace, Mid-City, and Seventh Ward were all among neighborhoods that had at least 150 fewer children in 2010 than in 2020. Old Aurora had the largest decrease in child population, down more than 700 since 2010. As of the 2020 Census, the large neighborhood of Little Woods had the most children totaling nearly 10,000. Old Aurora, Village de l’Est, Central City, Tall Timbers/Brechtel, Lakeview, and Behrman all had between 2,000 and 3,500 children. Another 21 neighborhoods had over 1,000 children. On the low end, seven neighborhoods had fewer than 250 children. 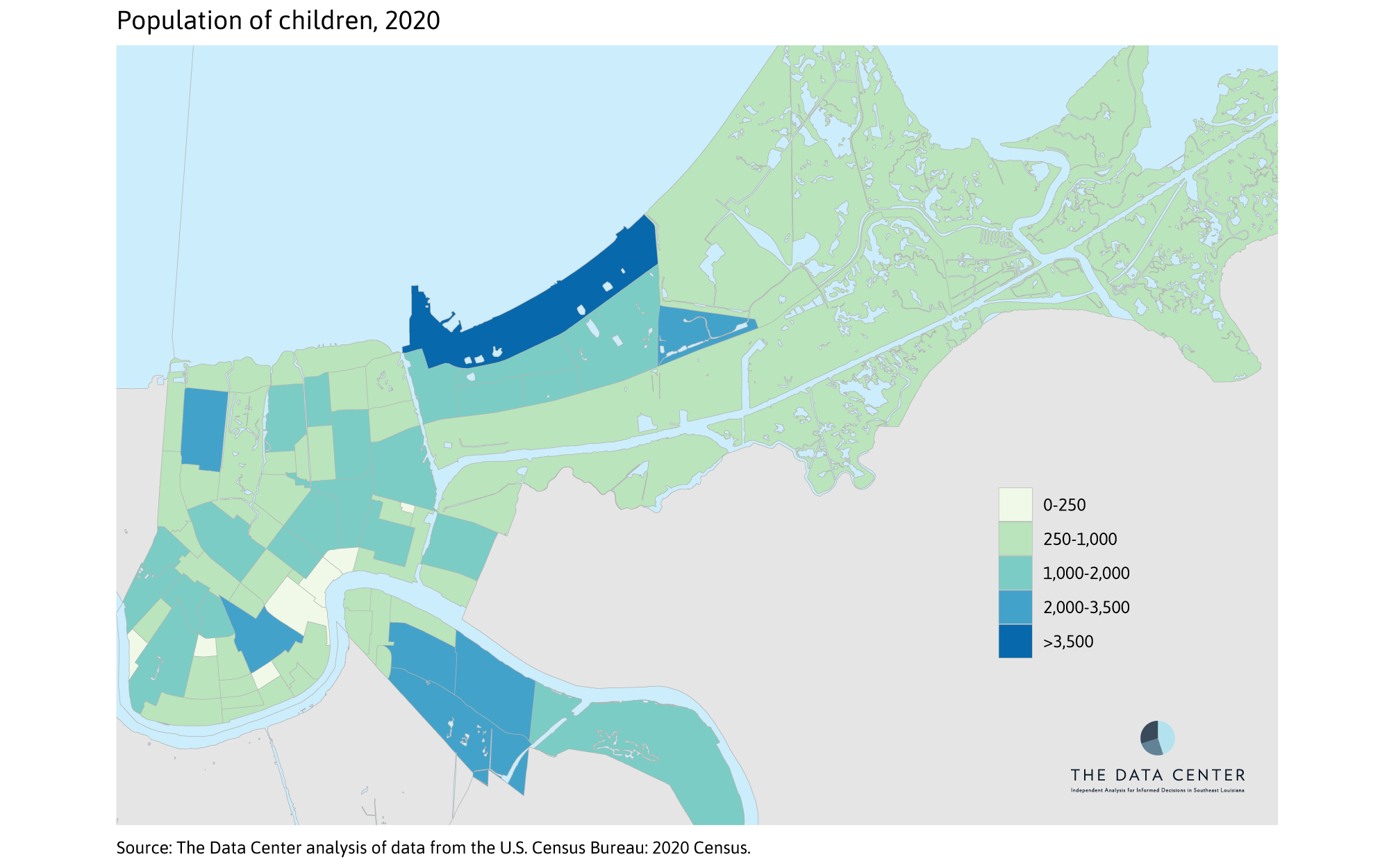 Limitations of the 2020 Census

In addition to the limitations described above, the data used in the analysis in this brief contains error or “noise” injected to adhere to federal laws that require the Census Bureau to protect the confidentiality of respondents. For the first time in 2020, they utilized a technique called Differential Privacy to protect the data. Differential Privacy requires a tradeoff between accuracy and privacy, and the Census Bureau has applied this methodology in such a way that data for small demographic groups in small geographies (such as census tracts/neighborhoods) could be inaccurate by more than 10%. As the data is aggregated into larger geographies, it becomes more accurate. However, this brief and the accompanying spreadsheet include data for small demographic groups in neighborhoods—data that contains some uncertainty because it may be more than 10% inaccurate. As such, readers and decisionmakers should be cautious about conclusions drawn based on small (<100) numbers.

Importantly, a relatively small portion of the Village de l’Est neighborhood was merged by the Census Bureau with Lake Catherine making comparisons from 2010 to 2020 somewhat imprecise.

Barry Edmonston, “The Undercount in the 2000 Census,” Population Reference Bureau, May 2002, https://www.prb.org/wp-content/uploads/2002/05/undercount_paper.pdf.