Drivers of Housing Demand: Preparing for the Impending Elder Boom

The aging of the baby boomers represents a demographic tidal wave that will profoundly affect housing needs and living arrangements in coming years. The authors examine three possible scenarios for the projected number and mix of households in New Orleans in 2020. But regardless of the scenario, the increase in households headed by elderly will greatly surpass the increase in any other household type. This report concludes with strategies for attracting new residents to the city and ensuring we meet the housing needs of aging residents, including the desire of many seniors to stay in their homes as long as possible.

Since the onset of the recession, job losses in the New Orleans metro area [1] have been more moderate than across the nation. However, the New Orleans metro had 98,300 fewer jobs and 148,746 fewer residents in 2010 than in 2000. As a result, demand for housing has declined since 2000, and vacancies and abandonment have increased. Current economic forecasts suggest only tepid job growth through 2018. Thus, demand for housing will likely be driven primarily by the changing needs and preferences of the population at its current level rather than by a large influx of newcomers.

Just as suburbanization has dramatically changed housing choices and caused major geographic shifts nationwide over the past half century, the aging of the baby boomers will profoundly affect housing needs and living arrangements in coming years. These impending changes may result in even greater loss of population and increasing blight in New Orleans. Or, by planning the city’s development with the knowledge of these demographic trends clearly in mind, we can leverage the power of these shifts to increase our population and reduce blight.

The progression of the baby boomers through the age ranks along with falling birth rates have already brought massive changes to our region — and indeed the whole country — with many more changes yet to come. For example, in the New Orleans metro area, since 1980, the share of households with children has fallen from 43 percent to 33 percent, while the share of individuals living alone has grown from 24 percent to 28 percent. These trends are likely to accelerate as the baby boomers age — with individuals living alone outnumbering households with children in the not too distant future.

By 2020, the share of the city’s households headed by adults age 65 and older will spike. We examined three possible scenarios for the projected household mix of New Orleans in 2020. The scenarios differ as to the number of households that move to the metro to take advantage of possible work opportunities and the mix of households that choose the city over other parishes in the metro. But regardless of the scenario, the increase in New Orleans households headed by elderly will greatly surpass the increase in any other household type. In the most conservative scenario, the number of elderly households will increase by 8,800 (or 34%) from 2010 to 2020.

The predictability of the upcoming demographic changes offers an opportunity for our city to get ahead of the curve and enact policies that support a diversity of households. The city and other stakeholders should continue to implement strategies to attract new residents. There are examples from other cities about coordinated marketing of neighborhoods and online portals to accomplish this goal. But in order for the city to thrive, we also need to ensure we meet the housing needs of aging residents.

Most older adults want to remain in their homes as long as possible. The community should support this choice, not only because of the householder’s wishes, but because it will reduce the number of homes coming onto the market in the near-term and avoid the risk of another vacant property, particularly in neighborhoods with weak housing markets. Many residents over age 65 will need no extra supports to remain in their homes. However, we project that by 2020 more than 12,000 New Orleanians over age 65 will have a moderate or serious disability and be living at home. For these households especially, the city, state, and community will need to develop a range of policies and programs that facilitate aging in place. These should include efforts to increase the accessibility of the housing stock through home improvements such as wheelchair ramps, widened doors, and off street parking, as well as through the promotion of universal design in some new construction. Beyond the house itself, the community should monitor the supply of in-home services that are available to assist with health needs and daily living, and explore public policies to encourage the growth of this sector. Finally, because 44 percent of older adults in 2010 in the city lived below 200 percent of the poverty level ($22,688 annually for a single person household), affordability will also be a major concern. Programs that reduce the cost of housing for older owners or renters with limited incomes would lessen the financial pressures to move. For seniors who cannot or do not want to stay at home, a wider array of housing options designed for seniors with varying levels of support services (and not just expensive nursing home care) could help retain long-time residents in the city.

A strong love of place is perhaps one of the most distinguishing features of New Orleanians. This love of place made us resilient enough to rebuild our city after the costliest disaster in U.S. history. If we start planning today, together we can ensure that New Orleans continues to be a place we can all enjoy well into our twilight years.

About Housing in the New Orleans Metro

The Housing in the New Orleans Metro series creates a common base of reliable information around housing and the recovery that is easy to use to support decision making at many levels as the New Orleans area moves from recovery to large-scale community development. Housing policy development must be informed by a solid understanding of demographic changes, housing demand and supply, housing affordability challenges, economic trends, and regional commuter patterns. The Housing in the New Orleans Metro annual report quantifies housing issues and raises promising policy options that can address current and future housing problems. In addition to the annual report, periodic Housing in the New Orleans Metro briefs highlight new data as they are acquired and analyzed to provide timely support to local, state, and federal decisionmaking. The complete collection of briefs and reports can be found on The Data Center’s website: www.datacenterresearch.org.

For a quick overview of the findings from Drivers of Housing Demand, check out our five–minute video briefing. 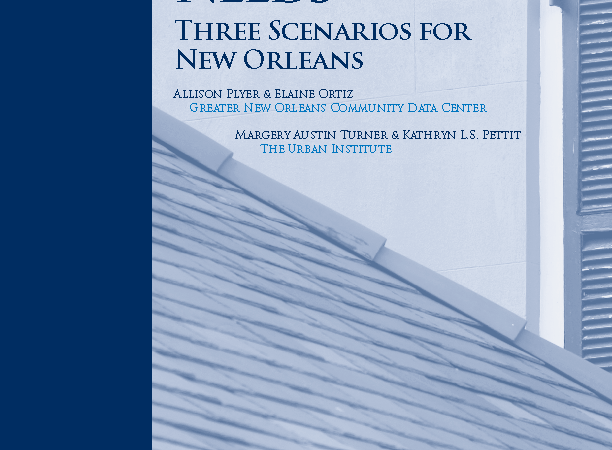 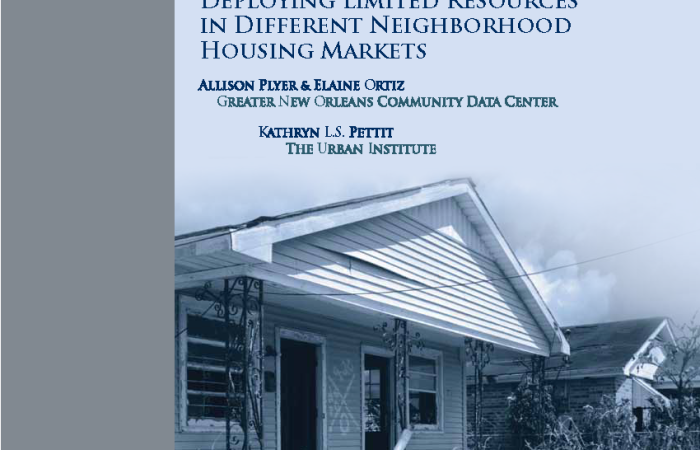