New Census 2010 data suggests that the New Orleans metro may be bucking stereotypical notions about cities and suburbs. Suburban parishes, like Jefferson and St. Tammany, experienced the most significant growth among Hispanic and Vietnamese populations. And nearly every suburban parish has a higher rate of single–parent households than the national average. Meanwhile, homeownership declined in New Orleans’ suburbs, but grew within the city itself. The share of elderly living alone grew in most suburbs while shrinking in the city. These trends suggest that leaders may need to reconsider how to supply housing and other services to better accommodate new demographic realities around the region.

This week, the Census Bureau released yet another wave of once–every–ten–year data about New Orleans, the metro area, and the nation. (The New Orleans metro area is defined as the seven–parish Metropolitan Statistical Area encompassing New Orleans, and its suburban parishes, Jefferson, Plaquemines, St. Bernard, St. Charles, St. John the Baptist, and St. Tammany.) This new data provides an in–depth look at the growth in Latino and Asian subgroups in our region, changing homeownership trends and age distribution, as well as growing shares of one–person households, declining shares of households with children, and distribution of single–parent households and elderly living alone. This data can inform planning and policy making around housing, as well as policies and programs serving children, the elderly, and our growing Hispanic and Vietnamese populations.

Prior to 2000, national growth in the Latino population far exceeded local growth rates. But over the last 10 years, the metro experienced a significant influx of Latinos and may be an emerging gateway for Latino immigrants.

Instead, during this time frame, Hispanics’ settlement patterns shifted within the metro. Many Hispanics moved out of Orleans, Plaquemines, and St. Bernard and into St. Charles, St. John, St. Tammany, and particularly Jefferson Parish. For example, in 1980, New Orleans had 19,226 Hispanics and Jefferson had 21,772 Hispanics. Over the next 20 years, the Hispanic population in Jefferson increased 49 percent to 32,418 while the Hispanic population in New Orleans decreased 23 percent to 14,826.

But Katrina dramatically altered these trends. From 2000 to 2010 the Latino population in the New Orleans metro spiked 57 percent — a rate greater than the nation’s 43 percent growth — suggesting that New Orleans may be emerging as an important gateway for Latino immigrants. Like other emerging gateway metros such as Atlanta and Raleigh–Durham, Latinos in the New Orleans area are more likely to live in the suburbs than the city [2]. Indeed, from 2000 to 2010, the growth of Latino populations in St. Charles, St. John, St. Tammany, and Jefferson substantially picked up pace––growing between 66 and 132 percent. Meanwhile the loss of Latinos from Orleans and Plaquemines reversed course and Latino populations began to grow in these parishes. And St. Bernard’s population loss would have been greater had it not been for Latino residents who exhibited higher population recovery rates than white residents.

Share of Hispanic population by nationality, 2010
Jefferson, Orleans, St. Tammany, and the U.S. 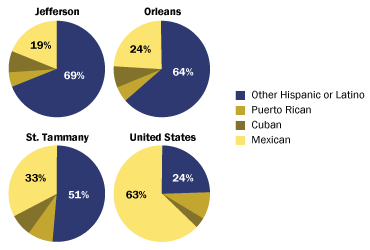 The New Orleans metro has served as a U.S. gateway for Vietnamese immigrants with large concentrations settling in Jefferson and Orleans parishes. Plaquemines and St. Bernard also have significant Vietnamese populations relative to their small population size.

Vietnamese are the most dominant Asian subgroup in Orleans, Jefferson, Plaquemines, and St. Bernard representing half or more of total Asians in each of these parishes. In St. Charles, St. John, and St. Tammany, however, the Asian population consists of a more balanced mix of several groups including Asian Indian, Chinese, and Filipinos. 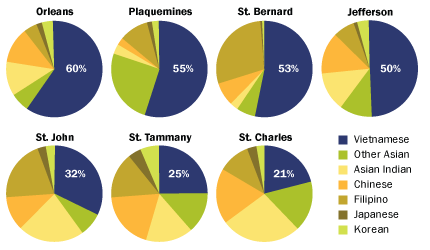 Indeed Jefferson, Orleans, Plaquemines, and St. Bernard all have larger shares of Vietnamese than the national average, and this has been the case in each of these parishes for several decades. In the 1970s, the New Orleans metro was an important U.S. gateway for Vietnamese immigrants when the Associated Catholic Charities of New Orleans helped many Vietnamese refugees settle in the area by finding them subsidized housing and jobs [3]. 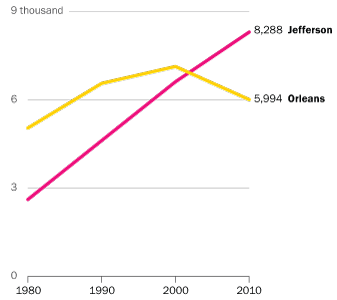 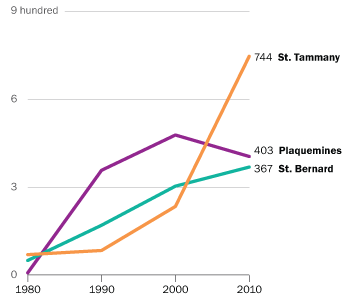 In 1980, the New Orleans metro area population had slightly larger shares of children under five years old (8.3 percent) and school age children 5 to 17 years old (22.3 percent) than the national average (7.2 and 20.9 percent respectively). At that time elderly 65 years and over represented a smaller share of the metro population (9.1 percent) than the national average (11.3 percent), as did working adults 18 to 64 (60.4 percent compared to 60.6 percent nationally). 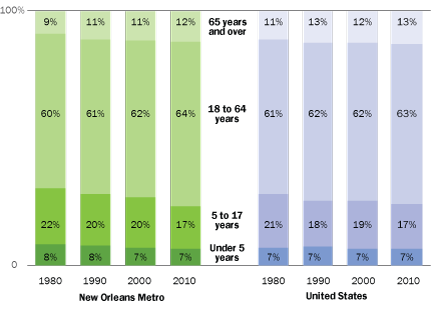 Across the metro area, as across the nation, the share of households with children is shrinking while the share of individuals living alone is growing, thus the average household size is falling.

Share of households with own children under 18 years and householders living alone
New Orleans metro and the U.S. 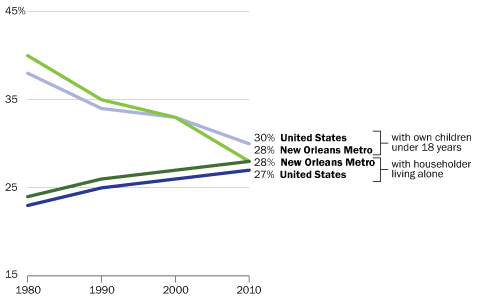 Share of households with own children under 18 years and householders living alone, 2010
New Orleans metro by parish and the U.S. 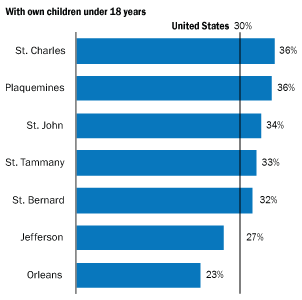 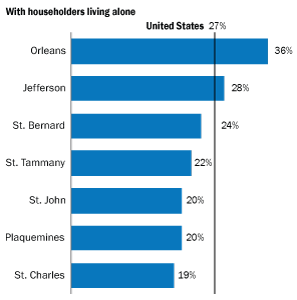 Share of households that are single–parent headed, 2010
New Orleans metro by parish and the U.S. 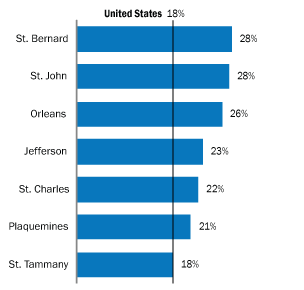 The share of households that are elderly living alone has decreased within the city of New Orleans but is growing in suburban parishes. The only exception is St. Bernard, where this share declined from 2000 to 2010.

Share of households that are elderly living alone
New Orleans metro by parish and the U.S. 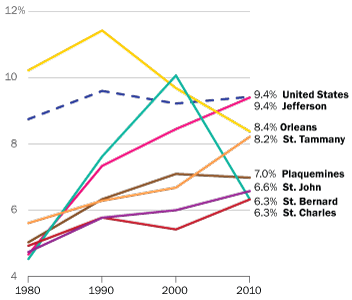 Homeownership rate
New Orleans metro by parish and the U.S. 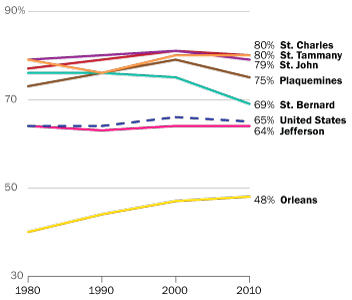 Studies of the accuracy of the Census 2010 count will not be undertaken until more Census 2010 data has been released. However, studies of earlier decennial censuses provide guidance as to likely limitations of the Census 2010. A state–specific study of the Census 2000 undercount conducted by PricewaterhouseCoopers concluded that Louisiana’s population in 2000 was undercounted by 60,698 or 1.34 percent [5]. Studies of both the 1990 and 2000 decennial censuses concluded that American Indians, Asians, African Americans, Hispanics, and children were most likely to be undercounted [6]. And a study of the 2000 decennial census concluded that some people were double counted, including college students living away from home, and families counted at both their main and vacation homes. These people were more likely to be white and higher–income [7].

[4] Plyer, A. (2011). Changes in Household Size and Group Quarters Populations Across the New Orleans Metro. The  Data Center: https://www.datacenterresearch.org/reports_analysis/average-household-size-and-group-quarters/.