The Loss of Children from New Orleans Neighborhoods

Children under 18 are a declining share of the population in the vast majority of New Orleans neighborhoods. The neighborhoods that experienced the largest disproportionate losses from 2000 to 2010 include public housing sites that are undergoing redevelopment—reminding us that New Orleans children are more likely to live in poverty than the national average. Today children in New Orleans live in less densely situated housing than before the storm.

New Orleans has lost 283,696 total residents since its peak in 1960—about half of that occurring over the last decade when the city lost 140,845 residents, or 29 percent of its population. According to 2010 Census statistics, children under 18 years old may have been the least likely demographic group to return following Katrina. From 2000 to 2010, the number of children in New Orleans has decreased by 56,193, or 43 percent.

Research on previous disasters indicates that families with children are less likely than the rest of the population to return to a disaster area [1]. However, it is important to recognize that children were a declining share of the New Orleans population before 2000—falling from 34 percent of the city’s population in 1970 to 27 percent by 2000, and finally to 21 percent by 2010. Thus, the loss of children post–Katrina may be, to some extent, the acceleration of a trend that was already observable before the massive displacement and redevelopment of New Orleans neighborhoods.

This brief examines changes in the number of children under 18 years of age by neighborhood from 2000 to 2010, as well as the current distribution of children across the city. 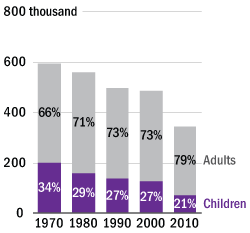 Children are a declining share of the population in the vast majority of New Orleans neighborhoods.

Only three New Orleans neighborhoods experienced an increase in the number of children over the last decade and in each case the increases were very minor. Specifically, Old Aurora, Touro, and Lake Terrace & Oaks gained 9, 10 and 52 children respectively. While the Central Business District, Audubon, Lower Garden District, Algiers Point, and New Aurora/English Turn all gained total population, they did so while losing anywhere from 24 to 415 children. 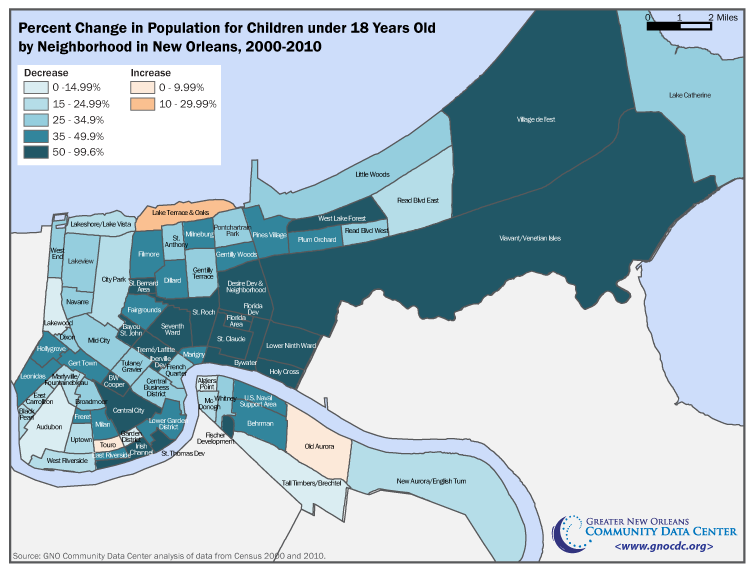 Today the neighborhoods that have the highest density of children are quite different than ten years ago. Although Iberville still has the highest density of children in the city, next on the list of neighborhoods with high densities of children are the Seventh Ward, Broadmoor, Freret, Milan, and Hollygrove. The reopening of Lafitte (now Faubourg Lafitte), the St. Bernard development (now Columbia Park), and C.J. Peete (now Harmony Oaks) provide or will provide additional housing for low–income families, but these developments are now less dense than they were in 2000 and will house fewer families over the same acreage. The new distribution of children across the city will be important for planning services for families and children citywide. 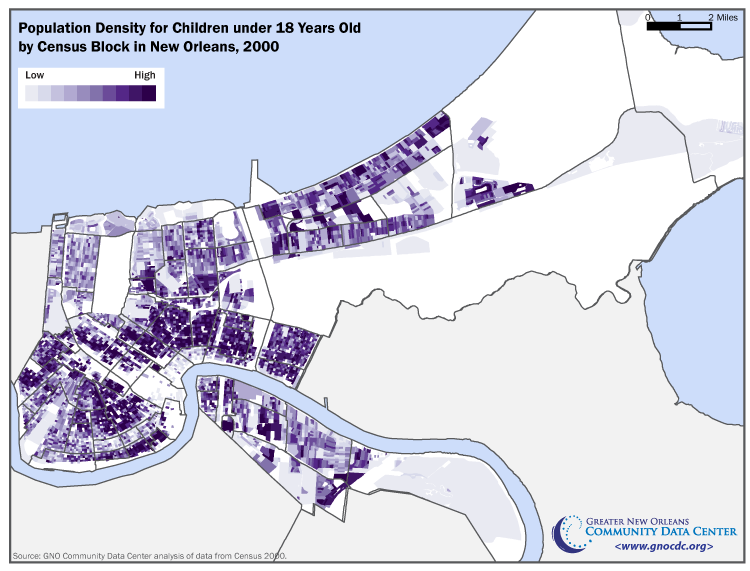 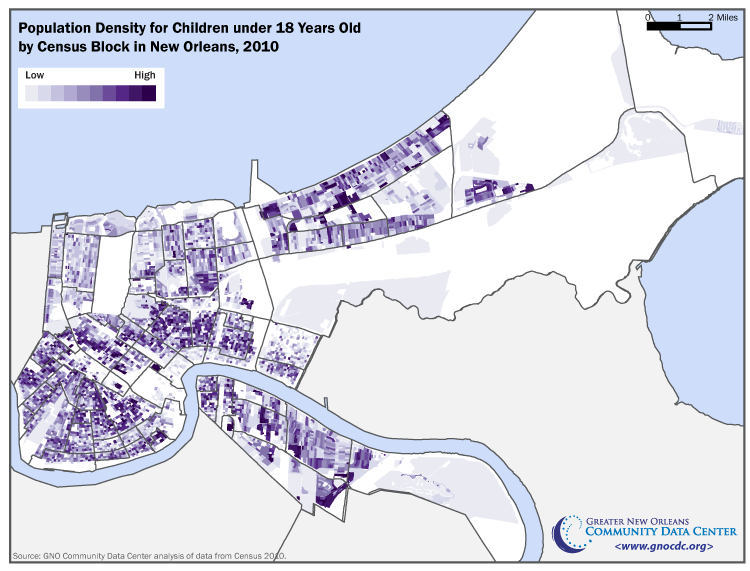 *Population of two blocks (bordered by Derbigny St. on the north, Claiborne Ave. on the south, Cleveland Ave. on the west and Iberville St. on the east) are included in the Central Business District in 2000, and in Tulane/ Gravier in 2010.

Studies of the accuracy of the Census 2010 count will not be undertaken until more Census 2010 data has been released. However, studies of earlier decennial censuses provide guidance as to likely limitations of the Census 2010. A state–specific study of the Census 2000 undercount conducted by PricewaterhouseCoopers concluded that Louisiana’s population in 2000 was undercounted by 60,698 or 1.34 percent [3]. Studies of both the 1990 and 2000 decennial censuses concluded that American Indians, Asians, African Americans, Hispanics, and children were most likely to be undercounted [4]. And a study of the 2000 decennial census concluded that some people were double counted, including college students living away from home, and families counted at both their main and vacation homes. These people were more likely to be white and higher–income [5].

Look for more data on children this summer

The Data Center will publish more analyses of children by detailed age groups this summer when the Census makes this data available.

[2] In a study of neighborhood change in Chicago between 1970 and 2000, a decline in the percent of the population that is children was found to be strongly linked to gentrification. Other studies have also documented that newcomers to a gentrifying area, especially the early newcomers, are less likely to have children. See Nancy Hudspeth, “Gentrification and Decline in Chicago: Defining Neighborhood Change with Census Data,” April 2003, accessed online at http://www.uic.edu/cuppa/voorheesctr/Publications/VNC%20CONFERENCE.pdf and Maureen Kennedy and Paul Leonard, “Dealing With Neighborhood Change: A Primer on Gentrification and Policy Choices,” Brookings, April 2001, accessed online at http://www.brookings.edu/reports/2001/04metropolitanpolicy.aspx

[4] Edmonston, Barry. “The Undercount in the 2000 Census,” The Annie E. Casey Foundation and The Population Reference Bureau, May 2002, accessed online at http://www.aecf.org/upload/publicationfiles/undercount%20in%202000%20census.pdf